In many ways, the early reception of Kantian philosophy within medicine became the point of departure for the early Romantic era in Germany. Immanuel Kant’s delineation of knowledge – more specifically, his denial of our capacity to ever really grasp living organisms – had a significant impact on the theory and practice of late-18th and early-19th century German medicine (an influence that still prevails in reductionistic approaches to medicine). According to Kant’s theory of knowledge, our discursive intellect proceeds from the isolated parts of nature and subsumes these parts under the universal concepts of the understanding, such that it can never grasp unity in its diversity. More specifically, by proceeding from the parts to construct a whole, the discursive intellect is incapable of grasping organisms, which consist of inherently distinctive but mutually supporting parts. In view of the inadequacy of discursive understanding, Kant acknowledges that: “It is at least possible to consider the material world as mere phenomenon, and to think as its substrate something like a thing in itself (which is not phenomenon), and to attach to this a corresponding intellectual intuition” [1]. As an integral part of their reaction to Kant’s delineation of knowledge, romantic thinkers sought to elaborate the mode of thought capable of grasping organisms as integrated identities, namely intellectual intuition. They recognized that this approach must be intellectual because it must be capable of seeing ideas and not merely sensible data. And it must be intuitive, as opposed to discursive, because it does not grasp empirical objects as things determined by and known in terms of external conditions, but as a self-subsisting, self-producing unity [2]. 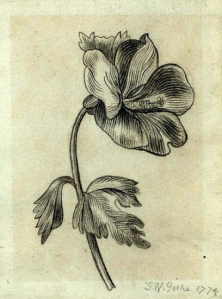 One of the most seminal thinkers in this romantic response is Johann Wolfgan von Goethe. Throughout his ambivalent reception of Kantian epistemology, ranging from distain and disinterest to active engagement and endorsement, Goethe remains a strong advocate of careful – one may even say reverent – observation of natural phenomena. Goethe lamented the hostility of Kant’s epistemology to a more immediate congress with nature [3]. His sojourn in Italy from 1786 to 1788, during which he devoted himself to studying the metamorphosis of plants, had convinced Goethe that the veil surrounding nature was not as impenetrable as Kant’s epistemology dictates. The first fruits of Goethe’s labours in the Sicilian gardens at Palermo were cultivated shortly after his return to Weimar in the form of a little book, The Metamorphosis of Plants (Die Metamorphosis der Pflanzen, 1790), which, “seeded a revolution in thought that would transform biological science during the nineteenth century” [4]. Albeit simple in its execution, the methodological implications of Goethe’s study are immense. In contrast with previous researchers, who focused on how different parts of a plant appear at various stages of development, Goethe emphasizes the process by which one and the same organ appears in a variety of forms. He demonstrates that if plant parts are perceived alongside one another, one can begin to recognize continuity between the parts. The potential impact that Goethe’s insight has on the development of the life sciences, including medicine, after Kant cannot be overstated. In direct contrast with Kant, who attributes our recognition of an organism’s growth and development to heuristic aids, Goethe identifies metamorphosis as a foundational law of nature [5]. His observation of plant growth provides a living testament of a natural researcher’s capacity to grasp the unity that underlies and determines the parts and their relations. In agreement with Kant that only an intuitive intelligence can grasp organisms, Goethe is unwilling to deprive the patient observer of this capacity. Though he admits that the act of recognition implies a cognitive division, Goethe maintains that we have been granted the ability to reconstitute artificially that which should not have been divided in the first place in order to understand the natural world. In other words, he “affirms that humans have the ability to replicate . . . organic processes. . . as intellectual operations” [6].

Goethe’s experience as a natural researcher convinced him that if we allow intuitive thinking a place in scientific method, then – provided these are deployed in agreement with exact observation and clear thought – a much fuller and more complete experience of nature would be possible. He insists that a “great scientist without this high gift [of imagination] is impossible” [7]. But he is also careful to qualify that by this he does “not mean an imagination that goes into the vague and imagines things that do not exist . . . [but rather] one that does not abandon the actual soil of the earth, and steps to supposed and conjectured things by the standard of the real and the known” [8]. It is only ever in this moment of indistinction between empirical and creative encounters with nature that we can begin to grasp the mode of observation characteristic of ‘romantic science.’ Goethe’s mature conviction that his “ideal plant” stemmed from “empirical observations . . . [that] had been transformed by the creative imagination to reveal a deeper core of reality,” [9] is emblematic of the tradition that it spawned, namely, a romantic science of life. Far reaching in both its applications and implications, romantic medicine distinguishes itself from reductionist forms of medicine by engaging with living organisms as living organisms, without reducing them to disconnected, isolated parts. By responding to organisms in their ever-transforming and dynamic wholeness, a romantic approach to medicine enables us to therapeutically interact with what is most alive in us and in others.

[4] Robert Richards, The Romantic Conception of Life; Science and Philosophy in the Age of Goethe (Chicago: The University of Chicago Press, 2002), p. 407.