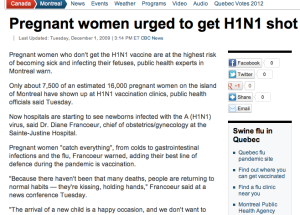 Just because a vaccine is recommended by government officials and state-sponsored media, does not mean that it is safe. One of the most startling examples of this discrepancy occurred during the H1N1 Swine Flu Pandemic.

While other countries raised concerns about the lack of safety tests for the H1N1 vaccines, Canada made use of Section 30.1 of the Food and Drugs Act, which gives the minister of health the authority to fast-track a drug “to deal with significant risk, direct or indirect, to human health, public safety, or the environment.” [1] As written on the “Package Insert” for Arepanrix H1N1 – AS03-Adjuvanted H1N1 Pandemic Influenza Vaccine:

Health Canada has authorized the sale of the Arepanrix H1N1 based on limited clinical testing in humans under the provision of an Interim Order (IO) issued on October 13, 2009. The authorization is based on the Health Canada review of the available data on quality, safety and immunogenicity, and given the current pandemic threats and its risk to human health, Health Canada considers that the benefit/risk profile of the Arepanrix H1N1 vaccine is favourable for active immunization against the H1N1 2009 influenza strain in an officially declared pandemic situation. [2]

The declaration of a pandemic allowed the Health Minister to authorize the vaccine on “limited clinical testing.” Pregnant women in Canada were especially encouraged to receive it even though, in contrast with the limited data of other populations, absolutely “no data [had] been generated in pregnant women with Arepanrix H1N1 nor with the prototype AS03 adjuvanted H5N1 vaccine.” [3] In the absence of information, vaccine manufacturer, GlaxoSmithKline, advised consumers that “considerations should be taken of any recommendations made by the Public Health Agency of Canada.” [4] And “the agency says vaccine with the adjuvant is safe for pregnant women.” [5]

As a token precautionary measure Health Canada ordered just under two million doses of the vaccine without the adjuvant for pregnant women concerned about the health risks associated with the adjuvant. [6] Within a few short months, however, the potential danger of the vaccine with adjuvant was considered negligible compared with the danger that pregnant women faced of being infected. In December, 2009, Public health experts in Montreal urged pregnant women in particular to get the H1N1 vaccine, since they were considered to be at the highest risk of becoming sick and infecting their fetuses: “It’s the only way to protect your little baby.” [7] Dr. Richard Lessard, from Montreal’s Public Health Agency acknowledged that there was “some confusion in the early days of the vaccine campaign” but assured the public that “it’s now clear that with or without the adjuvant – – an additive that boosts the immune system’s response to a vaccine – – the vaccine isn’t dangerous for pregnant women.” [8]

It is not clear on what basis Lessard discerned that with or without the adjuvant the vaccine was safe for pregnant women. But it is clear that there is a difference between an adjuvanted vaccine and a monovalent vaccine, namely the adjuvant. It is a critical difference and yet it was consistently overlookeded in the (non-existent) risk analysis of injecting pregnant women. Unlike the monovalent version [9] Arepanrix H1N1 – AS03-Adjuvanted H1N1 Pandemic Influenza Vaccine contains an adjuvant that “enhances the vaccine-induced immune response and contains naturally occurring molecules (squalene and vitamin E) plus an emulsifier (polysorbate 80).” [10] Honing in on just one of the toxic ingredients, polysorbate 80 is a well researched substance and researchers have concluded that it cannot safely be used as a solvent for isolated tissue experiments “nor when considered for intravenous administration.” [11] It has been shown to depress the central nervous system, reduce locomotor activity and rectal temperature, [12] cause severe nonimmunologic anaphylactoid reactions, [13] and – – most notably – – cause infertility [14]. Despite the well documented damages associated with one of the main ingredients in the adjuvant, when the danger to pregnant women was considered high, it was decided that “with or without the adjuvant . . . the vaccine isn’t dangerous for pregnant women.” [15]

A comparison is instructive: in the absence of a pandemic, when GlaxoSmithKline is held to marginally higher safety standards, it explicitly acknowledged that ‘no data has been generated in pregnant women’ means that “safety and effectiveness” of a seasonal flu vaccine with adjuvant “have not been established in pregnant women or nursing mothers.” [16] Accordingly, they stipulate that all women who receive the vaccine while pregnant should be informed of the lack of safety tests and should be registered with GlaxoSmithKline’s pregnancy registry. That is, if, and only if, it is considered absolutely necessary to administer it to them. After all, the manufacturers at GlaxoSmithKline reason that since there are “no adequate and well-controlled studies in pregnant women,” the vaccine should be given to a pregnant woman “only if clearly needed.” [17] When the world was no longer in a state of alarm, during the 2011 flu season, GlaxoSmithKline acknowledged that “although excess morbidity and mortality were observed among pregnant women during the pandemic outbreaks in 1918-19 and 1957-58, further studies are needed to determine whether pregnancy per se is a risk factor that warrants routine influenza immunization.” [18] But in a state of emergency, “pregnant women who don’t get the H1N1 vaccine are at the highest risk of becoming sick and infecting their fetuses.” [19] Pregnant women are lined up to receive the vaccine because it is considered “the best solution because it offers an almost perfect protection.” [20]

When considering the safety of vaccines, it is critical to remember that the risks involved with vaccination do not change when the danger of infection is considered high. The only thing that changes is the population’s eagerness to line up for it.